Milorganite is a type of fertilizer known as a biosolid.  It has gained popularity in the home-owner market, as it should, because it accomplishes many positives on the checklist of what makes a fertilizer a good fertilizer. That being said, there are a few lacking critical parts of the fertilizer that should be taken into consideration when choosing to use it.

Producers take sewage sludge from wastewater facilities (solids) and anaerobically digest it (without oxygen) through the addition of acetogenic and methagenic microbes/bacteria. Most biosolid production plants capture the methane released by the methagenic microbes and reuse it to generate electricity to either power the plant OR to sell back to the municipality energy companies. Once the microbes consume all the material (carbohydrates, fats, proteins), the microbes are left food-less and die - this is when the biosolids are ready to be prilled.

The biosolids enter a rolling chamber to agglomerate the solids as well as remove excess moisture. While rotating, they’re treated with a dusting agent and iron to provide prill “crush strength."  Finally, they are sent to be bagged for retail.

MILORGANITE - As A Fertilizer

Milorganite has a new analysis of a 6-4-0-2.5%Fe.  This percentage breakdown means there is very little nutritive value per pound, but in high quantities, it does deliver quite the punch.

Biosolids typically contain 20-30% carbon and CAN lead to an increase in soil carbon (in turn decreases soil bulk density, leading to a higher soil surface area - storage capacity). Biosolids typically increase soil exchangeable calcium (pH buffer with continued, cumulative use).  That being said, I would recommend the use of biosolids to adjust soil pH.  It will slightly acidify soil prior to begin buffering pH.

Biosolids contains complex forms of nitrogen coming from proteins, amines, nucleic acids, and cellular wastes - meaning in order for N and P release to occur, serious digestion must take place. Digestion leads to release of ammonium N (~3% by weight) (NH4) as well as nitrate (~.5% by weight) (NO3) [from the AMS video]

Increase in biosolid N concentration is a direct reflection of the production process. Increased efficiencies with lower heat leads to lower volatilization and ability to harness higher N rates. 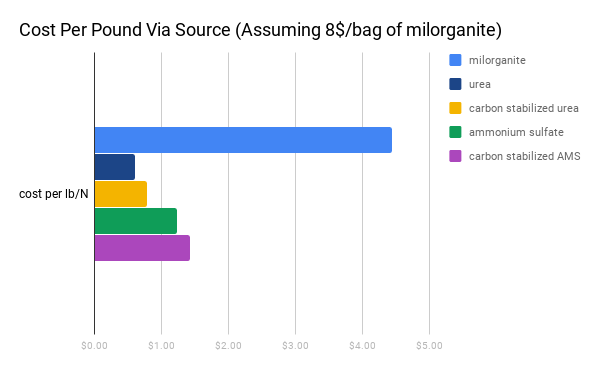 Release of organic N sources is referred to as “nitrogen mineralization”

Under incubation (peak microbial performance), 30-40% N release could occur over a 16 week period at its fastest rate.

Total N from biosolids typically range in 60+% efficiency = for every 1lb N applied = ~ .6lbs gets utilized.  This would be more in line with AMS stabilized with carbon.

The added benefit would be the addition of calcium and minors which can be supplemented cheaply in comparison.

Milorganite is fine for simplicity.  It’s a simple way to make your lawn look good - a “set it and forget it” type approach to building soil N, C, and turf performance.  That being said, it’s expensive, takes a relatively long time, and it offers limits.

The limiting factor is control over color in “adverse” conditions - cold/heat (decrease microbial activity). Limiting factors is control of P levels (may not be an issue for much of the country, but transition zones, non coastal, are typically high P. High rates of milorganite can lead to excess soil P(clay soils) and ultimately tied up micronutrients, chlorosis.

While milorganite offers “almost” balanced nutrition, it does not offer any K.  Soil K levels (according to Pace) do not need to be excessively high for turf to perform well, but K is a required nutrient.  Some is better than none. A bunch is not better than some. Milorganite offers none.

Milorganite is a starting point to a more optimal growing environment. It sells itself as being complete fertilizer, but it is not complete.  Excess P (long term), Absence of K (long term) will show diminishing returns after 3-4 years without k supplementation or lack of supplementation from fertilizers not containing P.

I’d call it a good starting point, but will leave the lawn open to additional needs to help it achieve “next level” results.